One Minute of Video is Worth 1M Plus Marketing Words 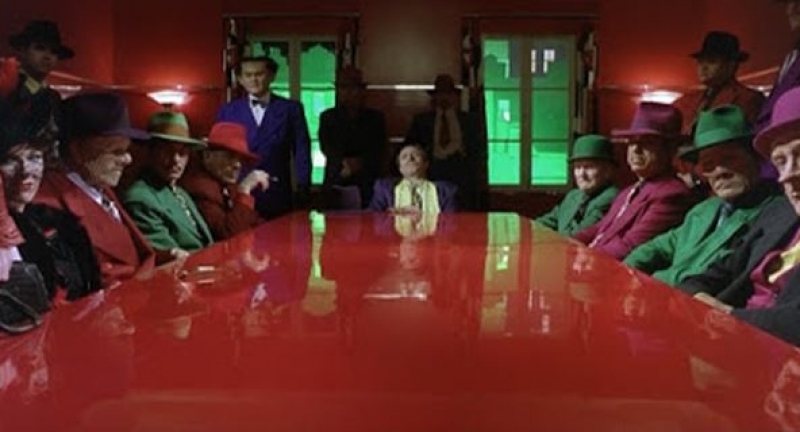 One Minute of Video is Worth 1M Plus Marketing Words Source - "Dick Tracy," Touchstone Pictures

If you think the broadcast industry is in a state of disruption with linear TV folks trying to figure out how they’re going to compete with the organizations that were born digital and online, it’s a magnitude six earthquake for CMOs (Chief Marketing Officers).

Posts in the leading social media, ads that magically follow you around the web and tweets may work; but in our overcommunicated environment, they just aren’t memorable or actionable.

Taking a hint from the M&E (media & entertainment) industry, marketing is beginning to see that video isn’t just for the huge budget organization; and that there’s a broad range of video opportunities – long, short and really short form – that can help them reach and build a relationship with prospects and customers.

And, according to a recent HubSpot report, it works:

Action – With content coming at people from every direction, companies need material that will stand out from the crowd and come alive to all of the customer’s senses.

It makes sense, since:

Sharing – If you want people to share your video content; and who knows, even make it go viral, there are certain parameters you have to consider when “talking” to today’s visually sophisticated consumer.

But creating the right acceptance and the right impact isn’t easy.

The key for monetizing marketing efforts is to produce ads and documentaries that appeal to people.

All too often, that isn’t easy when they are over-weighted with technical points, features and self-serving presentations.  When that happens, people use their ad-blockers or they simply click away.

Informative, entertaining creative content is the most effective.  It educates, inspires, increases brand awareness and convinces consumers better than 1,000,000 plus words!

Video is becoming increasingly important because it:

And there are more stats … everywhere!

Sure, Apple highlights beautiful ads showing ordinary folks shooting insanely great stuff; and cripes, we all have 4K cameras on our phones!

But what they don’t tell you is that they reviewed thousands of videos to find four that worked and then spent days/weeks producing that 30-sec, 1-min ad.

Having a camera and even access to a powerful Mac, Adobe Premiere and Blackmagic DaVinci doesn’t make you a filmmaker, shooter or production/audio expert.

DIY – Sure, there are a lot of things you can do by yourself including taking out your own appendix just as Dr. Leonid Rogozov did in Antarctica in 1961; but sometimes, letting someone else do the job is safer.

Leveraging their expertise and experience, filmmakers like the three below have taken a creative approach to generating interest and sales without requiring big, Hollywood budgets.

Jim Courtright, of Big Thinking by the Hour, has been producing promotional and marketing content for more than 10 years and his clients have always told him his approach was effective for them.

But when he started watching the available content on his smartphone, most of what he saw was TV ads that were just shrunk to fit on the phone’s small screen.

He knew good filmmakers could do better if the content was produced specifically for the smartphone screen and would be more effective than pre-roll ads.

His one-person crusade has helped both well-established firms as well as start-ups build awareness, interest and sales.

Phone Mate – Filmmaker Jim Courtright, of Big Thinking by the Hour, carved out a content production niche for himself several years ago; producing short, made-for-phone videos.

Last year, Jim set out on a one-man crusade to change marketing’s thinking. He redesigned his website to show how brands could get in sync with the audience’s viewing habits.

He helped one of his earliest clients, Alexis Reiff, to successfully attract retailers and consumers for her Heel Swaps.

“When you produce an informational or educational piece for the screen everyone carries with them, you have to catch their interest quickly, educate/inform them and close quickly,” he explained.

“It’s a challenge to get your message across in 6 to 10 seconds,” he noted, “but if you don’t get them involved with the complete message quickly, Gen Zers and Millennials will leave in the blink of an eye.”

A number of leading advertisers have already moved to the six-second ad in YouTube and are finding them to be extremely effective.  At Cannes, guests said the six-second rule was becoming the standard because it matches with younger folks’ attention span. 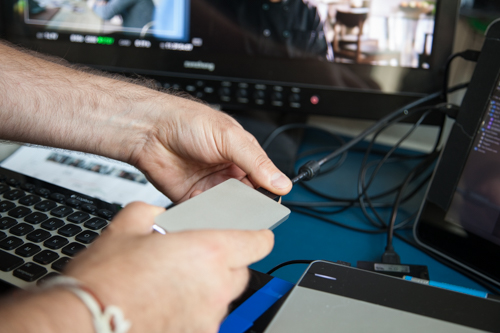 Portfolio – Courtright always has his filmwork portfolio with him on his 240GB Envoy Pro Mini.

What Courtright likes about the niche he’s carved out in the Chicago area is that the approach works for people with both big and small budgets.

Done on a minimal budget, the fast-forward fashion video has attracted tens of thousands of views on Ms. Reiff’s social media site and opened retail outlets across the country.

Since then, Courtwright has produced thousands of brand videos for firms.

“The content not only works for firms,” he added, “but when people want to see work, I can simply plug in my USB SSD and show them videos that are similar to the project they want produced.

“Ask me what I do,” he grinned, “and if there’s a USB slot handy, I can entertain you for hours.”

Texas Style
When you say Texas, you have to think of beef.

Cooking Series - Ralph Smyth Entertainment recently produced a 6-part social media campaign on how to cook and enjoy your beef for the Texas Beef Council that features local celebrity Jess Pryles. Traffic and pass-along viewership has been outstanding.

In the first 24-hours after posting the second segment in the series, the Council told Lee the segment had already racked up over 500,000 views, 2.3k reactions, 696 shares and 297 comments.

Slim Budget – While Texas beef may be filling, the budget for the Texas Beef Council was definitely on a diet; so to protect their content, all of the data was stored on a Mercury Elite Pro.

Now that’s the kind of response management wants to see for every video they put online!

Because the project had to be done quickly, smoothly, professionally and accurately; the Smyth team used Adobe Premier for the post work, keeping all of their RAW and production content on Lee’s personal OWC Mercury Elite Pro.

“Storage is perhaps the one thing we’re most particular about,” Lee said.  “We’ve stuck with one provider since we did “Intramural,” which was picked up by MGM and renamed “Balls Out” and released under the Orion Pictures label.  The firm has also produced a documentary “Dealt,” which has won multiple festival awards and is scheduled for a Fall release.  “Dealt” has been four years in production.

While marketing has found video to be an efficient and effective way to promote concepts and products, nothing beats experiencing them first-hand.

Road Trip – Cream VR recently completed a series of 360 degree innovation road trip videos for Lexus to highlight the fun and pleasure of driving the cars to exciting, interesting locations.

Andrew MacDonald, creative director at Cream VR in Toronto, said that is probably why marketing teams were the first to see the advantages of virtual reality in promoting their products.

Citing their recent project for Lexus, he said the video series was designed for both social media viewing as well as for people visiting the dealership where they could put on an HMD (head-mounted display) and “visit” locations in Canada and the Southwest U.S.

With the videos posted on YouTube visitors can control the screen a full 360-degrees to see everything as they are “driving” along as well as when they get out of the Lexus and enjoy the scenery.

“With VR, we were able to both tell a story and give the viewer the ability to look around inside and outside the cars, maximizing the experience,” said MacDonald.

“Our biggest challenge though was to give the viewer the feeling of being a part of the driving experience without causing any damage to the vehicle,” he recalled.  “Lexus was a little touchy about getting the car back in the same condition we got it…without nicks or scratches.”

“To deliver that experience, we devised a method of extending the VR camera out from the car on a long carbon fibrepole, giving the effect of a camera flying alongside the car,” MacDonald explained.

Opening Scenes – Cream VR’s creative director begins production work on the newest 360 VR Lexus video that will be shown on YouTube and in showrooms where consumers can gain the complete, immersive driving experience.

Because they were shooting at multiple locations and on a tight budget, getting it right – and keeping it – was important to the Cream VR crew.

The theme for the Lexus series was innovation; so, in the Arizona segment, they featured a solar engineer at a massive solar power plant shooting in temperatures of 110 degrees.

“You definitely didn’t want to have to go back and put your body through that kind of torture, especially when you’re used to Toronto weather,” he added.

Capturing content with our four-camera VR rig in tandem with a traditional film crew shooting on several 4k cinema cameras and a drone created terabytes of content, daily.

“Being able to efficiently and safely store the footage, while on the road was essential and that’s where the OWC ThunderBay storage units came in very handy.” he noted.

Back at their studio, they quickly stitched and post produced the Lexus series for distribution to the company’s dealerships and posted them online.

Lexus has been an early adopter of VR as a medium and made a strong play producing many VR spots. Some have been more showroom oriented with “sit in the car and experience it” kind of stuff. Others include content like the “Invisible” series with Lexus sponsorship.

In this case, they went for a documentary style VR piece that combined the experience of driving a Lexus with factual entertainment, which Cream does so well.

The host of this series was Les Stroud (AKA “Survivorman”) which was originally a Cream- produced show.

Forrester’s McQuivey may have erred on the conservative side when he said a minute of video is equal to 1.8 million words.  Especially when you can see the results on the company’s bottom line!

Big Boy Caprice didn’t pull any punches when he said, “You're right. When you're right, you're right and you are right.”